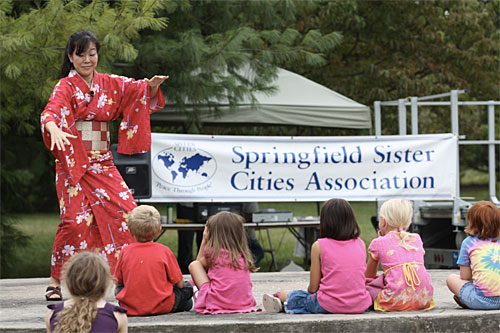 The relationship between Isesaki and Springfield is now approaching 24 years and in that time we have had a very cordial and exciting exchanges. It has now been three years since an official delegation from Springfield has visited Isesaki, and the committee feels that we need to make a personal effort to nurture this relationship.

Isesaki now has a new Mayor and unfortunately no personal visits were made last year due to the ?Swine Flu scare. For this reason, the Isesaki Committee has budgeted to send a small delegation to Japan to show their new city leadership that this relationship is very important to us.

The committee is also recommending that we expand the Cherry Blossom Kite Festival this year in two ways. First, the committee and board have agreed to have a rain date. This will require an additional commitment on the part of volunteers, but not the budget. Secondly, we are going to invite all other entities that exist in the Nathanael Greene Park to have a presence during the Festival. These include the Master Gardeners, The Friends of the Garden, The Botanical Society, Ozark Greenways and the Gray Campbell Farmstead. As we know, all other events with Isesaki were canceled this past year, except for the Japanese Fall Festival. We decided to continue with the festival and provide performers from the United States. We were fortunate to obtain two women who perform in Florida at Epcot Center. Kuniko Yamamoto, the story teller performed on the stage and in schools throughout the district, for which she was reimbursed by the schools.

Miyuki Sugimori, the candy lady, performed in the park and was able to sell her creations to observers. Therefore, both performers were able to augment the fee we paid them. We were able to hire them for far below their normal fees and yet they have informed us they would like to come back next year. We also hired the Taiko Drummers from St. Louis, who were excellent, and negotiated a lower fee than they usually command. In addition, a top spinner came from St. Louis on Sunday and performed for reimbursement of gas and lunch.

The festival began with the traditional parade of school children on Friday evening. Approximately 250 Springfield Public School children participated. The childrens’ area was also well attended and Carrol Lund took charge of this activity. A challenge for the future will be to find a replacement of Carrol, as she will retire soon and will no longer continue with the Sister City activity she has developed over the years.

SSCA always relies on the souvenir tent to be both a source of entertainment at the event, but to also be a revenue generator for us. Purchasing the items for the tent was another one of the many things that was affected by the H1N1 virus, so we would like to thank Isesaki for stepping in and helping us this year. We look forward to purchasing the items ourselves for 2010.

The Tea Ceremony was somewhat limited because we did not have our Isesaki friends to assist. We held the ceremony on Saturday and Sunday and Yuiko Mizumoto Scott performed the ceremony each time. She had the help of one individual, but we would like to offer this popular event to more people. To do this, we need to find individuals who are qualified to perform the ceremony. Do you want to help?

The Festival was attended by more than 9,000 people and broke a record for gate revenue. The entire festival required approximately 180 volunteers. Many of them volunteered the entire three days. The weather certainly contributed to a very successful event.

As a committee, we are very happy with the results of this year and feel that we have greatly contributed to the financial stability of our organization. Our wrap-up meetings have resulted in the following recommendations for next year’s festival, which require the support and participation of the board.

Have a buying trip to purchase merchandise for the souvenir tent and ask vendors at the festival to sign a non-compete agreement. Have Sister Cities table prominently located at all events to publicize events and who we are. Assist in obtaining sponsors to bring in additional performers. Locate an individual to carry on with the children’s area. The committee is reviewing many other improvements, such as a more attractive program, better signage and maps of the park and various other improvements to make the festival run smoothly and be even more profitable. Many of these will also require additional expenditures.

The committee has also endorsed the Missouri State University initiative for a student exchange, including both of our sister cities. Discussion is ongoing.