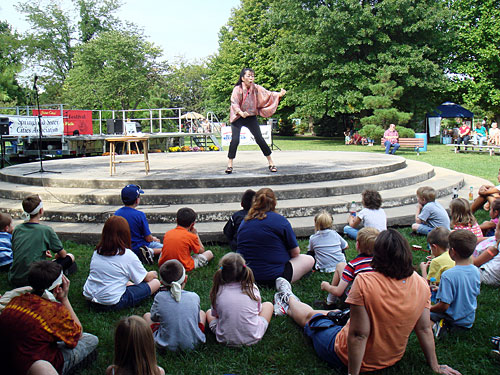 Remember the news headlines in April and May of last year? The stories about the H1N1 virus seemed to be non-stop. Unfortunately for that virus, and the same heightened fear, made its way to Japan and our sister city of Isesaki.

Several visits were scheduled for 2009, including a men’s softball exchange and a high school student delegation visit, as well as our won JRB Band traveling to Isesaki to perform at their summer Festival. However, the H1N1 virus put a stop to everything. The national government of Japan issued travel warnings. And of course, when the national government issues warnings, the local city governments must oblige.

The result? Isesaki canceled all schedule visits to and from Springfield, This is the first time in out 24-year relationship we have been faced with such a challenge. The student exchange alone has gone uninterrupted for 21 consecutive years. And this was the first time in the history of our Japanese Fall Festival that they did not send a performing delegation to be our headliner.

So, we rely on the old adage that if you are given lemons, the best thing you can do is make lemonade. The Iseaski Committee voted to use the funds that we had dedicated to hosting our delegations (taking them to events, sightseeing, gifts, sayonara party, transportation) and applying it to recruiting special entertainment for our 14th Annual Fall Festival. We were confident we could make this one the best events ever. We hired two performed from Orlando, Florida’s Disney Epcot Center. First was Kuniko Yamamoto, an amazing traditional Japanese storyteller. To use the words “storyteller” doesn’t begin to describe what she does. Imagine Mask, costumes and illusions along with stories that keep children on the edge of their seats.

We also had Candy Miyuki, the “Candy Lady!” Folks, we are talking about first class entertainment, a true artist. She has appeared on national television shows like “Rosie O’Donnell.” Right before your eyes, she turns a small lump of taffy into a beautiful swan, or dragon, or just about anything elese you can imagine. She even did candy “portraits.”

We also the wonderful, heart-pounding Osuwa Taiko group from St. Louis. They are always a big draw, and they keep the crowd so entertained with their drum beating a acrobatics.

We were thrilled this year to have top-spinner from St. Louis, the local JRB Band, locak artists and musicians, tea ceremony, Bon Odori dance, martial arts, koto, and so much more. The children’s hands-on area hosted by local high school kids is an important part of our event each year. The souvenir tent is such a hit, and a nice fund-raiser for SSCa. This year we added a few seminars, where folks could learn about things like traditional Japanese indigo tie-dying, ikebana (flower arranging), and bonsai. We hope to grown this area next year to include even more learning opportunities.

A special thanks to the hundreds of children who participated in our opening night parade. Wow! It just keeps getting bigger and bigger. The kids danced their way to the stage, wearing headbands, led by Hiromi and her friends. Parents, grandparents, and friends lined the walkways as they entered.

Please remember — SSCA shares the gate revenue with the Springfield-Greene County Park Board, to help further develop the Mizumoto Japanese Stroll Garden. We could no do this event if not for the efforts of the Park Staff. They continue to be our biggest supporters.

Mark your calendar for September 10-12 of this year for the 15th Annual Japanese Fall Festival. We need volunteers for the event, and host families for our visiting performers.

Thanks to the many who donated their efforts to make this last festival a success. It requires much time and skill, and we count on all of you to make it work!