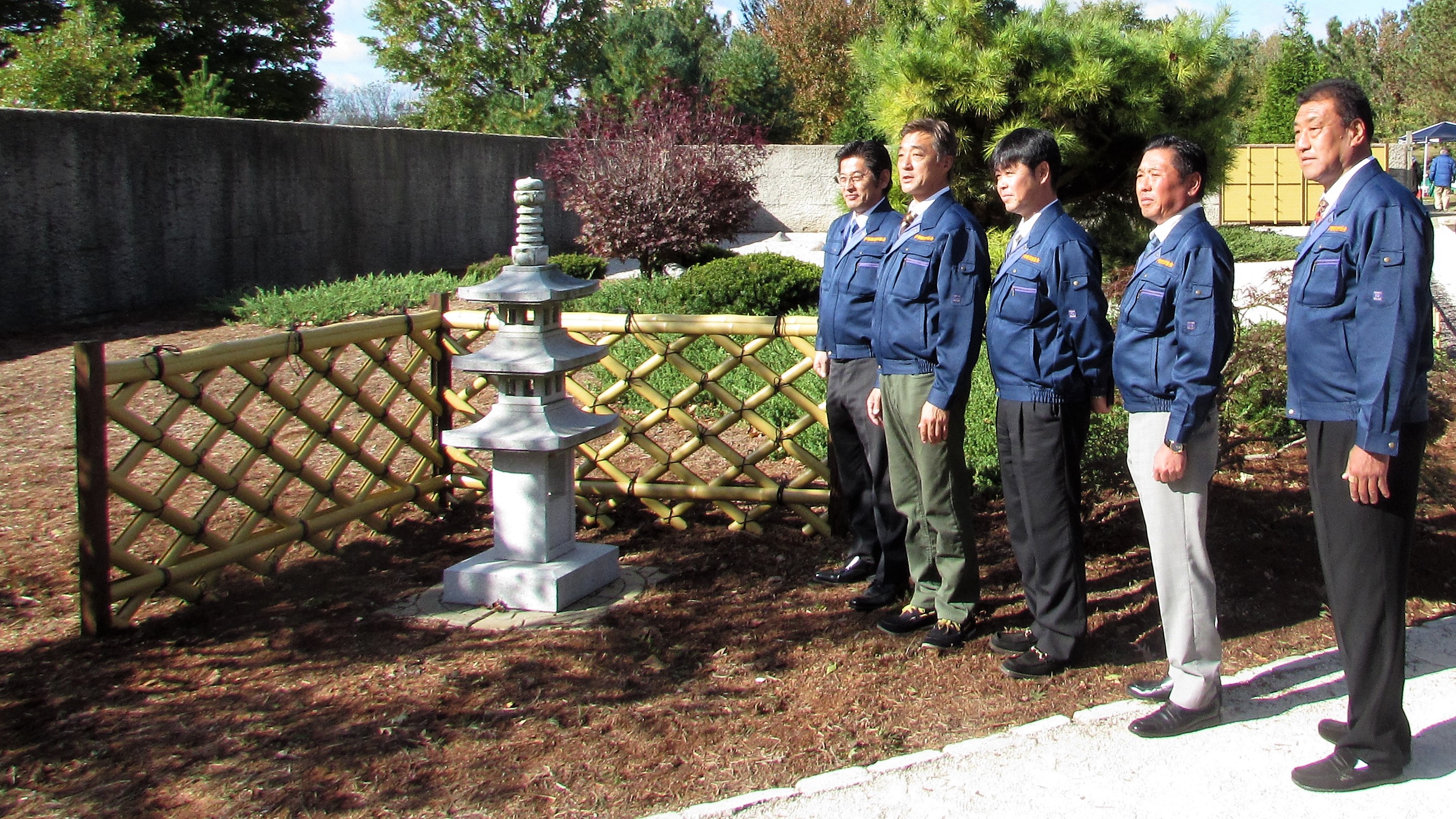 Five gardeners from Isesaki, Japan visited Springfield from Wednesday-Sunday, October 25-29, 2017 as part of the delegation to celebrate the 30th anniversary of the Sister City relationship between Springfield and Isesaki.

The gardeners, highly regarded in Japanese culture, shipped tools and materials from Isesaki to Springfield for use in the Mizumoto Japanese Stroll Garden.

They worked in the meditation garden on Thursday, October 26 and then participated in a “Lunch and Learn” as facilitated by Friends of the Garden (FOG) on Friday, October 27. FOG members, Springfield citizens and garden lovers, and Springfield-Greene County Park Board employees were invited to join the Isesaki gardeners for lunch before working alongside them in the meditation garden.

Led by the Isesaki gardeners, the group made substantial improvements to the gardens. The Isesaki gardeners demonstrated Japanese pruning and fence building techniques. All involved had a great time learning from one another and building relationships.

Below is an excerpt from the FOG newsletter which is printed in Ozarks Living magazine.

“A ‘gift of time’ from Isesaki gardeners”

by George Freeman, FOG Board Member and Ozarks Living Editor

Although now closed for the season, the garden is the centerpiece for a “Peace Through People” relationship between Isesaki, Japan and Springfield.

Just as any garden is a “work in progress,” so it is with the venerated Mizumoto Japanese Stroll Garden. Most recently, the garden received another round of extraordinary attention from the Isesaki Gardeners Association. Working with parks staff, a traditional bamboo fence was created to guide visitors through the Meditation Garden, a sea of contemplation created when crushed white stone and
character boulders are combined with sparse plantings meant to bring serenity to the soul.

The visiting gardeners also created an ornamental bamboo fence as a backdrop for a Japanese lantern on the stone pathway. One of the most enduring sanctuaries since Nathanael Greene Park was created, the delegation from Isesaki included city leaders and citizens. Traditional Japanese dancers performed, and each delegation exchanged gifts at an elaborate dinner.

Last year, Springfield celebrated the 30th anniversary of our Sister Cities relationship by planting a dogwood tree in a park setting in Isesaki.

In a ceremony on Saturday, Oct. 28, the Isesaki gardeners reciprocated by planting a Japanese maple at the entrance to the Meditation Garden. The tree was donated by Myron Royce Gardens of Ozark after owner/landscaper Michael Fessenden heard about the event.

Among many conversations was the fate of an azumaya, a traditional summer pavilion erected between the Busch building and historic Springfield City Hall as a gift in 1996 from Isesaki.

Ben Kellner, park supervisor at the Springfield Botanical Gardens, says the azumaya will be carefully disassembled and relocated just outside the entrance to the stroll garden amid rolling berms and plantings.