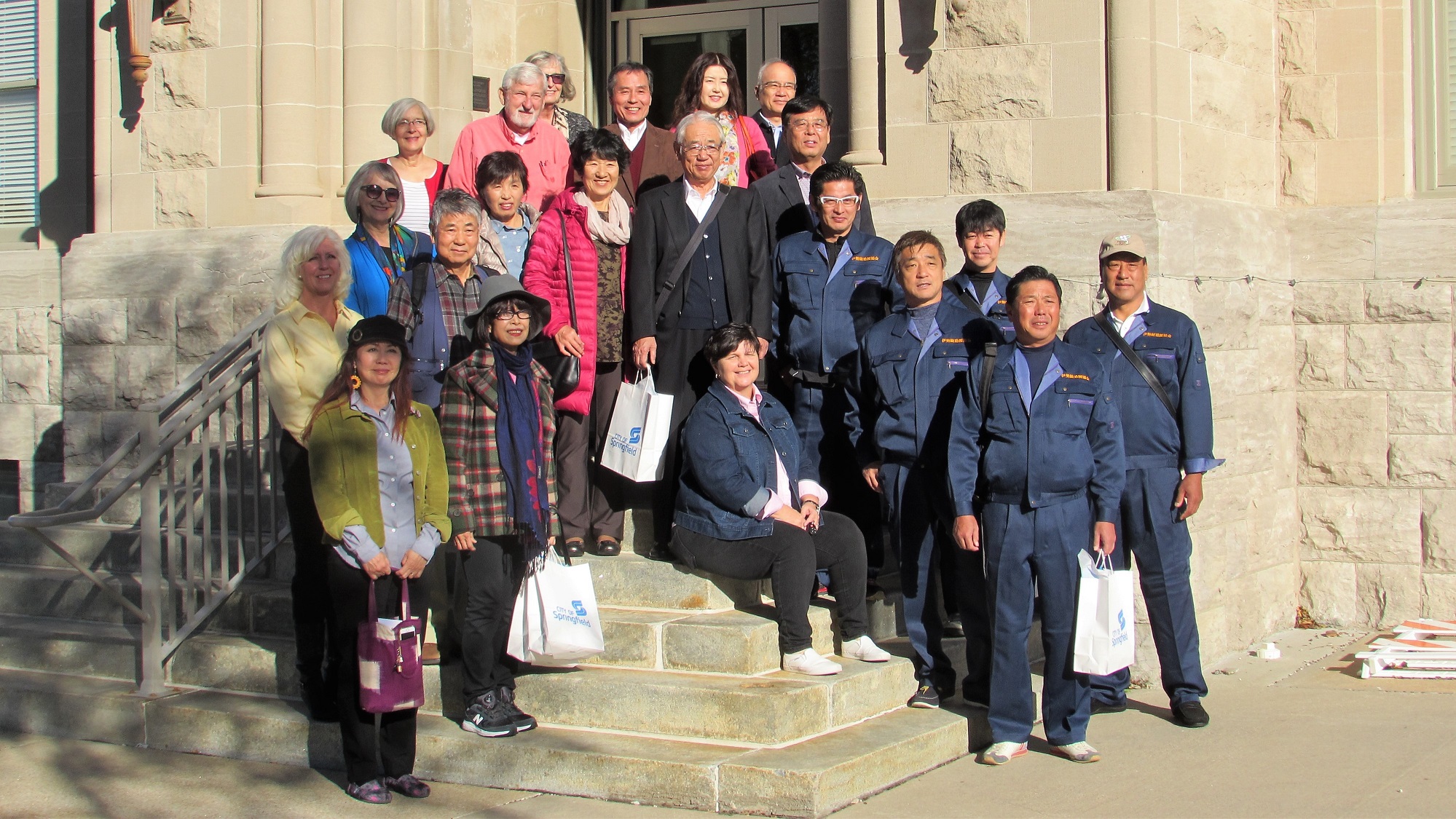 We enjoyed a meaningful visit from friends from Isesaki, Japan who helped us celebrate the 30th anniversary of the Sister City relationship between Springfield and Isesaki. Sixteen Isesaki delegates arrived late in the evening on Wednesday, October 25 and were greeted by a warm welcoming party in the Springfield-Branson National Airport‘s Board Room. The Isesaki delegation consisted of five city officials, five gardeners, and six general citizens; they were an “answer” delegation in response to the group Springfield sent to Isesaki in 2016.

On the morning of Thursday, October 26, all of the delegates received an official welcome from Springfield’s Mayor Ken McClure, City Manager Greg Burris, and City Council in the Council Chambers at the Historic City Hall. Next, the delegates enjoyed a tour of Fantastic Caverns. Then the five Isesaki city officials took a tour of Missouri State University while the five Isesaki gardeners began important work at the Mizumoto Japanese Stroll Garden. The day ended with the official 30th Anniversary Ceremony at Oasis Convention Center. Guests enjoyed music by Uke 66 in the atrium, and the ceremony featured dinner and ample gift exchanges.

On Friday, October 27, the six Isesaki citizens enjoyed spending the day with their host families and experiencing life in Springfield. The Isesaki officials and gardeners took a tour of Wonders of Wildlife and then parted ways for the afternoon. The city officials enjoyed lunch and took a tour of Askinosie Chocolate. The gardeners participated in a “Lunch and Learn” facilitated by Friends of the Garden (FOG) and completed more work at the Mizumoto Japanese Stroll Garden. The day was ended with a gathering at the home of Lisa and Randy Bakerink, who provided dinner, games, and campfire s’mores, while Uke 66 (and the Isesaki delegates) provided sing-a-long music.

The morning of Saturday, October 28 featured the official Tree Planting Ceremony, dedicated to the 30th anniversary of the relationship between Springfield and Isesaki. Then, the delegation enjoyed lunch at Café Cusco with Councilwoman Phyllis Ferguson, who visited Isesaki with the Springfield delegation in 2016. Councilwoman Ferguson treated the Isesaki delegation to a tour of historic C-Street, a sneak peek at “Thriller on C-Street,” and participation in “Paint a Pole.” The afternoon ended with a Sayonara Dinner Party which went well into the evening at the Branson lake home of Russ and Pam RuBert.

The Isesaki delegation departed Springfield from the Springfield-Branson National Airport on the morning of Sunday, October 29. We are so grateful that they took the time to visit Springfield and share their culture with us.

A big thank you to Councilwoman Jan Fisk (who also visited Isesaki with the Springfield delegation in 2016) and J. Howard Fisk of Fisk Transportation for providing transportation to the Isesaki delegation during their stay in Springfield.

A special thank you also to all of the host families, the Bakerinks, the RuBerts, and everyone else who helped ensure our friends from Isesaki had an enjoyable and meaningful visit in Springfield.